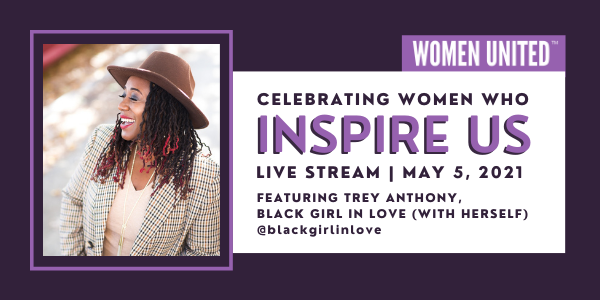 Windsor, ON – Just in time for Mother’s Day, United Way/Centraide Windsor-Essex County’s Women United group is bringing an inspirational speaker to local audiences for its 5th annual Celebrating Women Who Inspire Us event on Wednesday, May 5, 2021. This year’s event is a ticketed livestream presentation which will bring together women from across the community and support the launch of United Way’s On Track to Success Downtown Windsor student cohort.

This year’s keynote address features Trey Anthony, an award-winning Canadian playwright and producer of the critically acclaimed play and TV show Da Kink In My Hair.  Her personal and professional stories are both inspiring, and her message focuses on learning to love yourself and creating the life you deserve.

The Celebrating Women Who Inspire Us livestream takes place from 12-1 pm on May 5, with a pre-show running from 1130-12 pm. It’s the perfect Mother’s Day gift during a pandemic and everyone is welcome to attend. To register, people are invited to make a minimum donation of $25 to United Way in advance of the live presentation at www.weareunited.com/CelebratingWomen. Participants will be sent a link to join and watch the live broadcast from the comfort of their own home. This year’s event is sponsored by Windsor Star, BMO Private Wealth and Clear Medical Imaging.

For a sneak preview, tune into United Way’s Facebook page for a livestream interview with Trey Anthony at 1 pm on April 22.

This signature event is presented by Women United, a group of dedicated women philanthropists who work together to support youth in Windsor-Essex through United Way. Women United holds this annual event to invite women to learn more about the group and get involved in companionship, networking, and stewarding their giving and voluntarism in support of the community.

Media wishing to interview Trey Anthony, a Women United member or a United Way spokesperson in advance of the May 5 event are invited to schedule an interview through the media contact below. Spokespeople, including Anthony, will be available to media on May 5 between 9:30-11 a.m. A Zoom link can be provided to conduct the interview.

Trey Anthony is a visionary creator, comedian, television writer, and award-winning playwright of international significance. The first African Canadian woman to have her own program on a primetime Canadian network, she is the writer of the critically acclaimed hit play and television show ’Da Kink In My Hair, which put her on the map as a mentor and role model. Anthony’s infectious energy, humour, and determination inspires audiences to go after ― and achieve ― their dreams.

‘Da Kink in my Hair debuted at the Toronto Fringe Festival and went on to run at the Princess of Wales Theatre, and in theatres in New York, San Diego, and London. It was named one of the top ten plays in Canadian theatrical history and was nominated for a Dora Award, the Canadian equivalent of the Tony Awards. Anthony’s new daring and thought-provoking work, How Black Mothers Say I Love You, was recently shortlisted at Sundance and optioned for a feature film to be directed by acclaimed director, Clement Virgo. Anthony also recently finished writing the first season of Ambitions, for the Oprah Winfrey Network, Lionsgate, and Will Packer Media.

In 2017, Anthony launched her new brand, Black Girl in Love, which features the first lifestyle planner/organizer geared at professional black woman and also includes, a popular touring theatrical show, merchandise, workshops, and retreats. She is also currently the creator and executive producer of ‘Dat Gyal Funny, a woman’s comedy festival for women of color, as well as a contributing writer for Huffington Post and the Toronto Star.

A sought-after professional speaker, Anthony delivers hundreds of keynotes per year, and has spoken at several prestigious universities including Harvard University. Using humour, personal insight and vulnerability, she is always a crowd favourite and her popular TED Talk continues to inspires thousands of people across the world.

In 2016, Anthony received an Arts Walk of Fame Star for her valuable contributions to the arts in Canada. She is also the recipient of four NAACP awards, including Best New Playwright.

Women United is a committed group of women leaders working together to engage other women in our community. Its mission is to mobilize the caring power of women to advance the common good in our communities. Women have a unique approach to giving and a desire to create true, lasting change. To learn more visit www.weareunited.com/WomenUnited  or Twitter: @WomenUnitedWE